Fashion and Jewelry in Ancient Egypt

The civilization whose jewelry safes lasted for thousands of years

The Mediterranean region was ruled by ancient Egypt from roughly 3100 B.C. to 332 B.C., when it was conquered by Alexander the Great. Most people are familiar with the Great Pyramids, which stand as icons of Egypt’s majesty. Explorers and scientists have learned many fascinating facts about Egypt, thanks to the artifacts that were left behind by this ancient civilization. One might even say that the ancient tombs and pyramids of this era were the great custom luxury safes of antiquity, though these historic sites served numerous purposes outside of theft prevention. Learn about the fashion and jewelry that people wore in ancient Egypt to see how current trends may have even originated with the Egyptians. 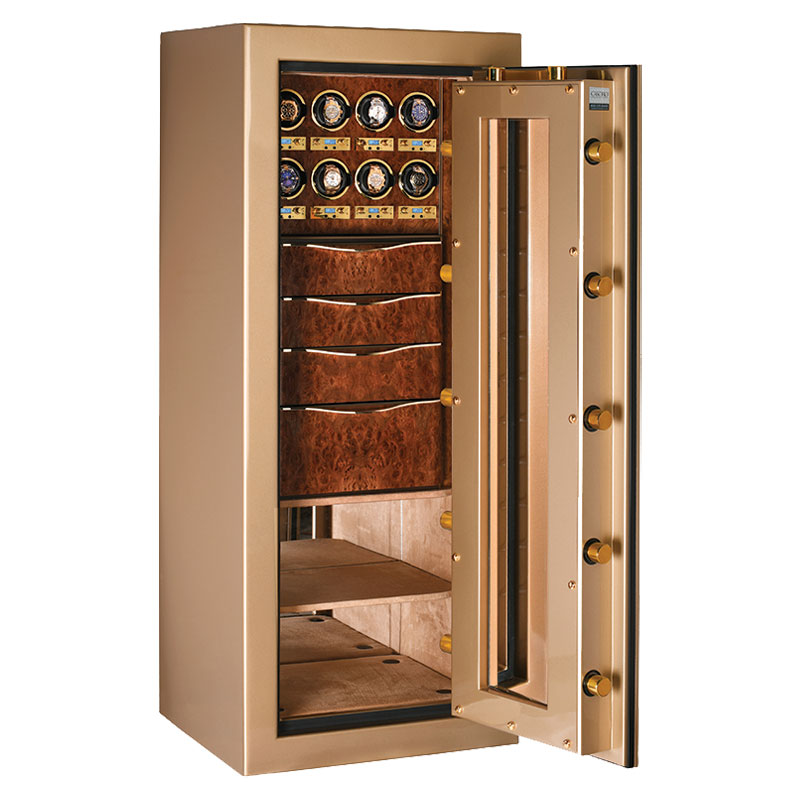 Explore our line of custom luxury safes, designs fit for a pharaoh.

Egypt’s desert location means significant warmth throughout the year. As a result, ancient people wore clothes made out of light fabrics that helped keep them cool. Egyptian pharaohs often wore animal skins as part of their outfits. Egyptians made linen out of flax, which grew abundantly along the Nile River. The Egyptian women were mostly responsible for making the clothing, although men helped with parts of the process. After the men harvested the flax plants, they soaked the stems in water and beat them to separate the fibers. Egyptian women would then spin these fibers into cloth for making clothes. Egyptian clothes were quite simple in style. Men wore skirts that might be different lengths, depending on current styles. Egyptian women wore full-length dresses with either one or two shoulder straps. Kids did not wear any clothes at all until they were about 6 years of age. Then, they began wearing the same types of clothes as adults.

Both men and women liked wearing lots of jewelry, and they sometimes wore fancy headdresses for special occasions. Jewelry was an important way that the Egyptians tried to get the attention of their gods. They thought that the more jewelry they wore, the more attractive they would be to the gods. Men and women who had great wealth usually wore the most jewelry. Egyptians wore necklaces, bracelets, heavy neck collars, pendants, earrings, rings, and special buttons on their clothing. Wealthy Egyptians had jewelry made out of precious jewels and gold. The common people couldn’t afford these luxuries, so they wore jewelry made out of colored beads.

Both men and women in ancient Egypt wore makeup. Some researchers think that a reason that everyone wore makeup in ancient Egypt was that they thought it helped protect them from the gods Ra and Horus. Egyptians also used cosmetics for their alleged healing powers. They lined their eyes with black eyeliner. They also used this substance to make their eyelashes and eyebrows look darker. Wearing this dark makeup around their eyes could have been a way to shield their eyes from the bright sun because it helped deflect the glare away. Egyptians often wore heavy blue or green eye shadow on their eyelids. Some of the minerals used to make this eye makeup may have helped prevent common eye infections. Women added henna dye to their fingernails and lips for color. Egyptian people also wore scents made from cinnamon, oil, and myrrh.

The linen used for clothing came in both fine and rough grades. The poorer people made their clothing out of rough-grade linen. Wealthy people could afford the finer-grade fabric, so their clothing was made from this type of linen. Fashion trends were important to the Egyptian people, and they liked to make sure they kept up to date with the latest styles. Royal family members often set fashion trends that carried over into society as a whole. Sometimes, trends set in other countries had an impact on clothing styles in Egypt.